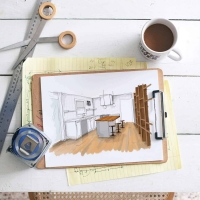 To Make the Strategic Decision whether to Renovate, you must consider the Buyer.

Deciding what improvements to do to before selling your home is the second most frequently cited challenge after decluttering that downsizers mention. Should you sink thousands (or tens of thousands!) into renovations in the hope that their house will fetch a higher sale price? Where is the best place to spend that money? What can be done on a limited budget? “What about free improvements, we really like those!” While there are some things that should be taken care of, we’ve all seen extensively-renovated houses in our neighbourhoods sell, only to have the dumpster show up on moving day so the new owners can rip out most or all of what was done!

Who has been moving into your neighbourhood recently? It’s not people just like you! The likelihood is that they are younger, dual-income families with children. They will be attracted to your area for the same reasons you were: the schools, the amenities, the bigger properties, and the affordability. They are also likely mortgaged to the hilt! That’s just the reality for move-up and first-time buyers.

In general, house hunters are motivated by finding the best value for their money, just as you were at their age and stage. There’s a lot of houses for sale for them to choose from. While their ideal might be a “move-in ready” home in their preferred neighbourhood and in their price range, buyers know that they might have to compromise on a few things to achieve their bigger goal of homeownership. Maybe it's a matter of investing some “sweat equity” into a home in an area they love, at a price that they can afford, but needing cosmetic improvement.

To Make the Strategic Decision whether to Renovate, you must consider the Buyer.

On the other hand, there is a portion of the buying population that is not interested or able to take on big renovations; either it doesn’t fit their lifestyle or their budget. They are not “handy” and don’t want to be bothered with even minor changes, but are willing to pay a premium for a truly “turn-key” property. These buyers are in the minority but do warrant some consideration.

By thinking about the potential new owner of your home, renovation becomes an issue of their balancing of price, condition and convenience as it relates to your home. But before you lift a hammer or pay someone else to, let’s address the things that you should do that will give you a huge return on investment, primarily because they are free or low-cost.

Interested in learning more? Register for our Best Renos for R.O.I Webinar!

This is a two-part series that focus' on understanding the Dos and Don'ts when it comes to Renovations & Repairs. You will be provided with a workbook and resources that will help you be successful.